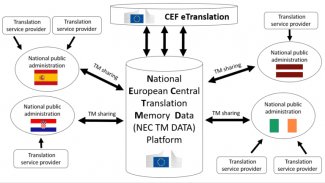 NEC TM was awarded to Tilde along with Pangeanic, The Secretary of State for Digital Progress (SEAD) and Ciklopea by the European Commission in September, 2018. Since then, all four partners have joint forces to fulfil the project objectives to enable a single digital market, encourage pan-European data sharing, organize Big Data and maximize translation profits.

The European Commission’s aim to promote and foster digital technologies has made data generated by the public sector increasingly relevant. The NEC TM consortium’s objective is to organize unexploited national bilingual assets generated by public administrations. These language assets will be used as open data and general data for machine learning, in order to lower translation costs at a national level and across member states.

The goal of this project is to bridge the gap between public administration and language service providers, to promote the free flow of data between public administration and translation professionals and to act as a bridge between ELRC (European Language Resource Coordination) and European data-gathering efforts and national digital data-gathering efforts.

To meet the objectives of the project, Translation Memory-sharing platform will be created, where TMs are shared directly among Public Administrations, LSPs and professional linguists working on translations for the public sector. Since the project is still ongoing, NEC TM Platform is in test version. However, free flow of translation memory and public administration-generated data has proven to optimize translation costs at national levels and across the EU since the TM can be used to translate repeated and similar texts. The NEC TM DATA platform features full text analysis, fuzzy matches and CAT-tool integration. The platform integrates, utilizes and enhances the CEF eTranslation platform for national and European digital services.

Thorough EU-wide market research was carried out to evaluate translation costs in public administration and estimate savings through development and use of translations memories in Spain, Latvia and Croatia for Innovation and Networks Executive Agency (INEA). The findings of market research backed up the project objectives with relevant data. Full market research reports will be made available to the public after the conclusion of the project.