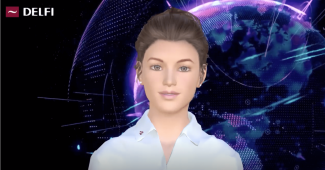 Europe’s first artificial intelligence (AI) news anchor recently has been presented in Riga, Latvia. It has been created through a cooperation of a leading European language technology company Tilde and DELFI - the largest Latvian digital media company. The AI news anchor demonstrates the ambition of the Baltic countries to pioneer innovation in AI..

"The AI news anchor is a female character named Laura and she reads news in Latvian. Laura’s voice is based on that of a popular Latvian news anchor using the latest deep machine learning techniques. Neural networks “learned” to identify the structure of speech, tonalities, and intonations from voice recordings. Laura’s voice, generated by deep neural networks, mimics the natural language flow, rhythm, and intonation of the human news anchor. Until now only Google and Baidu were able to implement this approach for a limited number of languages.

This news anchor created in Latvia is being announced only three months after the Chinese news agency Xinhua introduced the world’s first AI news anchor. Therefore, with Tilde’s and DELFI announcement, the Europe’s tech and new media communities are joining the race to transform how media outlets deliver and personalize news. The next phase of the project will enable interactive communication with the news anchor and will provide content based on the user’s interests.

Andrejs Vasiļjevs, CEO of Tilde: “We are excited to facilitate digital innovation in news media. Baltic countries are an excellent playground to pilot new AI applications and test technologies that are based on European values of inclusiveness and language diversity. The DELFI AI news anchor joins the range of virtual assistants developed on the Tilde.AI platform that already serves companies, education institutions, and more recently Government communication with citizens.”

The AI news anchor also addresses social aspects on AI usage in media. Intelligible text-to-speech not only enables people with visual impairments or reading disabilities to consume trustworthy media but gives every DELFI user access it in a safe way even while on road: “A lot of people in Latvia already spend a significant time in the DELFI news portal. We wanted to provide our readers a possibility to use our service in a more convenient, safer and responsible way, for example when they are driving a car, doing sports or simply relaxing. Audionews is the future and we want to create a tool, which will change the habits of content use” comments AS DELFI CEO Konstantins Kuzikovs.

DELFI is the largest digital news media outlet in Estonia, Latvia and Lithuania. Established in 1999 it constantly ranks as the top Baltic website. DELFI focuses on analytical articles, real time news, as well as video commentary and interviews. One of the main principles of DELFI is news neutrality, thus allowing readers to have their own opinion regarding the presented matter.