Language technology platform Hugo.lv has translated and recognized millions of words since its launch 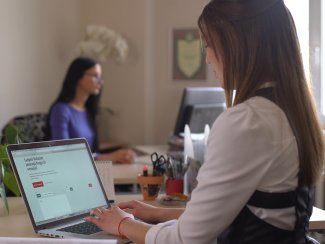 The extensive use of eGovernment language technology platform Hugo.lv undeniably demonstrates the value and importance of the platform for the state administration and the general public. According to the data compiled by Culture Information System Centre (CISC), Hugo.lv website was visited 1.1 million times in just one year since its launch. It processed 16 million translation requests and translated 310 million words while many users also took advantage of the integrated speech technology tools – 22 million words were identified using the speech recognition, and 4.6 million words were spoken using the speech synthesis functionality.

Hugo.lv is a freely available online language tool that provides automated translation in Latvian, English and Russian while also providing speech recognition and speech synthesis. Hugo.lv was developed using AI-powered cutting-edge technology and it is fully customized for Latvian language and state administration documents, therefore, its translation quality is much higher than those of other online translation tools. Statistics shows that visitors mostly used English-Latvian, Latvian-English, Latvian-Russian and Russian-Latvian language pairs.

The advanced speech recognition and speech synthesis tools significantly increases productivity and efficiency. It also allows individuals with vision disorders or dyslexia to access online resources and use various e-services. To use the Hugo.lv speech recognition tool, you have to upload the respective audio file, which is later converted into text. The speech recognition is performed by a software, so if there is any interference or noise in the file (background noise, several voices speaking at once, etc.), the text will not be identical to the audio recording, therefore it should always be checked before any further use. The speech recognition tool allows to save a lot of time that one would need to spend listening to the recordings. 4499 hours which equals to 187 days of audio recordings were transcribed which amounts to 22 million words of transcribed text in just one year. As to the speech synthesis service, interestingly enough, most users preferred to listen to a female voice, which is based on the voice of the legendary radio personality Sandra Glāzupa.

Hugo.lv project is implemented by the Culture Information Systems Centre and is supported by the European Union. The platform was developed by language technology company Tilde, which has an extensive experience and expertise in language technologies and related AI solutions specifically developed for public sector. CISC has already started implementing a project involving an innovative chatbot (or virtual assistant) platform for state and municipal bodies that will be based on the current language technology platform Hugo.lv. At the moment, chatbots are a rapidly expanding area of AI, and some countries already use or are developing them for their administrations. However, a single platform serving as a basis for chatbots of all governmental bodies will be a novelty in Europe. Thus, Latvia will become a pioneer in this area.

In the end of last year, Hugo.lv was awarded a very prestigious prize: Platinum Mouse 2019, which is equivalent to the Latvian IT Oscar and is awarded by the Latvian Information and Communications Technology Association (LICTA) established in 2007. This award honors the most successful Latvian-made digital solutions, outstanding project authors and developers, and promotes awareness of meaningful use of technologies in business, state administration, education and public life.